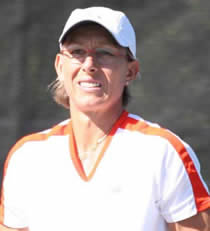 The naturalised American scooped a record-breaking 11 singles titles at Devonshire Park during an outstanding grass court career, which certainly helped boost her confidence going in to Wimbledon.

But Navratilova’s final appearance on the south coast of England was slightly soured in 2004, when the veteran was forced to qualify rather than be given a wildcard entry to the main draw.

Yet at 47 years of age, the sprightly American easily ousted Italy’s Mara Santangelo 6-4, 6-3. But rising Russian ace Elena Likhovtseva proved too hot to handle on a crowded Court No1, and dispatched the fans’ favourite 6-3, 6-2 in the second qualifying round.

Appreciating her limitations, Navratilova was tuning up for her very last shot at Wimbledon as a singles player. Yet at the Championships, the silky skills of the ex-Wimbledon winner shone through and Navratilova duly received a standing ovation for her emphatic demolition of Columbian youngster Catalina Castano 6-0, 6-1.

Round two at SW19 saw her tackle the much-hyped Argentinian pouting beauty Gisela Dulko, which resulted in one of the most memorable matches of Wimbledon 2004. But Navratilova bowed out graciously to fall 3-6, 6-3, 6-3 in the thriller.

In 2005 Navratilova would not play ball with the Eastbourne organisers, still upset after being forced to take part in their qualifying rounds for the first time in her career, so instead made her long overdue debut at the Ordina Open in s’Hertogenbosch.

Having not played on the circuit since her Wimbledon exit, Navratilova came close to winning her first match for virtually a year. She managed to edge the first set 6-4 against Claudine Schaul. But the little-known Luxembourg player stepped up a gear to overwhelm the 48-year-old 6-1 and a fascinating third set battle followed.

It proved to be a rollercoaster ride of emotions for the American, who succumbed 6-4 at the Ordina Open and subsequently retired from the sport for a second time.

“Navratilova would not play ball with the Eastbourne organisers, still upset after being forced to take part in the qualifying rounds at Devonshire Park for the first time.”

Born on 18 October 1956, in Prague, Czechoslovakia, Navratilova defected to the United States in 1975 and six years later became a full fledged American citizen. She took the name of her stepfather, Mirek Navratil, who helped her mother, Jana, raise her.

But despite her immense talent, Navratilova was frowned upon by potential sponsors, because of her defection and by coming out as a lesbian.

Although Navratilova learnt the intricate aspects of tennis on clay in Revnice, near Prague, she was an attacking player who favoured taking control at the net and putting opponents under pressure. Her naturally tenacious style earned her a spectacular run to the 1973 French Open quarter-finals.

It was as at Roland Garros, as a mere 16-year-old, when Navratilova attracted her first set of fans after upsetting former French Open champion American Nancy Richey.

Over a formidable career, Navratilova spent 331 weeks as the world no1 yet surprisingly only won two French Open singles titles (1982 and 1984) but settled for the runner-up spot four times. She reached six Australian Open singles final, winning half of them (1981, 1983 and 1985). And Navratilova also won half of the eight singles final at the US Open, registering triumphs at Flushing Meadow in 1983, 1984, 1986 and 1987.

But her proudest achievements were attained at the sport’s home, Wimbledon’s Centre Court. And Navratilova’s ferocious serve-and-volley tactics helped her become the all-time singles champion at SW19.

Despite such a tremendous record, especially on grass, Eastbourne left a sour taste for the great champion in 2004. A sprinkling of inexperienced young players commented about her Navratilova’s playing involvement and questioned whether the left-handed genius should have been enjoying retirement rather than taking the limelight off them.

Although Navratilova was easily the greatest grass court player ever, with nine Wimbledon singles titles and a winninng Eastbourne 11 times, whether she will return to Devonshire Park for expert analysis is anyone’s guess. For the true fans of the game, let us hope that the living legend will serve up some of her incredible knowledge and enlighten us with her thoughts and opinions.