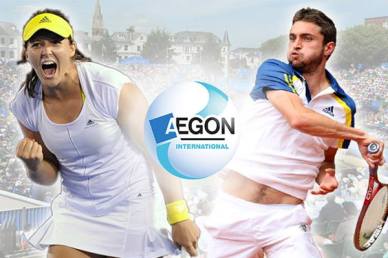 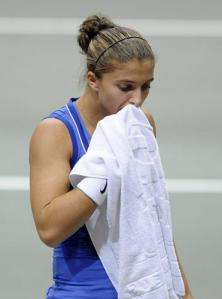 Sara Errani, who brilliantly battled her to the semi-finals at Roland Garros, misses Eastbourne with a late withdrawal.
The exciting Italian is suffering from both a foot injury and an abductor strain. But her loss has elevated Aussie ace Sam Stosur to provisionally become a seeded player.
Stosur, who only made late applications for wildcard entries at both Birmingham and Eastbourne grass court court events, will be among the players expected to progress during the week-long tournament.
However, following her shock exit at the 2013 French Open, Stosur slipped down the world rankings and has been usurped by Russian Nadia Petrova with the no 8 seeding slot.
With Li Na also granted a wildcard entry following a poor performance at the 2013 French Open, then the Chinese no1 has stepped into the shoes of Errani to take over as no2 seed. Li will be extremely eager to kick start her grass court season with progress at Devonshire Park.
Two former Eastbourne champions, top seed Agnieszka Radwanska and Denmark’s Caroline Wozniacki will provide stiff opposition on their favourite surface.
Angelique Kerber fluffed five match points in the 2012 AEGON International final to Austrian ace Tamira Paszek, so the German star will be determined to go one step better having learnt from her mistakes.
Former Wimbledon winner Petra Kvitova has never had much luck at Eastbourne, and the Czech Republic ace will be keen to put that record straight ahead of SW19.
Maria Kirilenko and Serbian star Ana Ivanovic will bring glamour to the courts as well as their amazing array of tennis weapons, although the Russian is unlikely to make much impact in a tough draw.
Four former Eastbourne champions are among an impressive set of unseeded players led by last year’s champion Paszek, France’s Marion Bartoli plus Russians Svetlana Kuznetsova and Ekaterina Makarova.
Seeds are:
Other players:

Milos Raonic, the world no15, has taken over the mantle as top seed for the 2013 AEGON International from Gilles Simon after being granted a wildcard on Thursday evening.

The Canadian was bundled out of the 1st Round of the Gerry Weber Open in Germany by French ace Gael Monfils on Tuesday without putting up much of a fight in a 6-4 6-2 reversal.

Despite his infamous booming serve, Raonic made a string of unforced errors and whimpered to his concede defeat – following on from his early French Open exit after being out served by South African Kevin Anderson.

But Raonic’s game has recently been going through a bad patch after he parted ways with Spanish coach Galo Blanco last month.

The 22-year-old has turned to Croatia’s Ivan Ljubicic, who retired from competing on the ATP Tour last year after 14 seasons, on a trial run. The pair are working together from Monte Carlo as they both reside in the tax-free haven.

Montenegrian-born Raonic said: “Being coached by Ivan will really offer a new dimension to my game, as his recent experience on Tour is a major plus for my development.

“I’m looking forward to learning as much as I can from him and to continue to grow my game in the best way possible.

“We both come from aggressive styles of play, so he understands the mentality I have on court as well as the areas where I can improve.”

The British duo of Kyle Edmund and James Ward have also been given wildcards into the Eastbourne event.

Edmund, the world no444, became the youngest British player since Andy Murray to win a Futures event with the Birmingham, Alabama title in American crown in October 2012.

The 18-year-old explained: “This is only my second ATP World Tour event so I’m very excited to be playing against some of the world’s top players.”

Great Britain Davis Cup stalwart Ward came close to breaking into the top 100 last April with a career-high world ranking of no137, and took American ace Mardy Fish to five sets at 2012 Wimbledon before bowing out.

The son of a London taxi driver, Ward’s best results and displays have been on the grass courts in England although he shocked Russian Dimitry Tursunov in April’s Davis Cup tie.

Ward, a 2010 AEGON International quarter-finalist, admitted: “I’m really looking forward to returning to Eastbourne, it’s the perfect opportunity to get in some matches ahead of Wimbledon.”

Simon, the 28-year-old from Nice, was relegated from being the top seed, and British fans will probably remember the current world no17 bowing out to Olympic champion Andy Murray at the 2013 Australian Open.

German Phillip Kohlschreiber (world no18) has the perfect all round game that is suited to grass, so is the most probable champion at Devonshire Park.

Argentinian Juan Monaco (world no20) is the no4 seed but is a clay court expert so is likely to find the adjustment from a gruelling season on a slower surface difficult to adjust to.

In-form Kevin Anderson has been given the no5 seeding. The 6 foot 8 inch South African star will be a force to be reckoned with courtesy of his thundering serve and game suited to fast surfaces.

Ukraine’s Alexandr Dolgopolov, a Devonshire Park regular, takes the no6 slot with former Eastbourne champion Andreas Seppi of Italy a dangerous opponent as no7 seed. Seppi’s compatriot Fabio Fognini takes the no8 berth.

But the player that the seeds will be aiming to avoid will be Monaco-based Australian Bernard Tomic, who in 2011 became the first teenager since Boris Becker to reach the Men’s Singles semi-finals at Wimbledon.

Tomic stuttered out of the 2012 AEGON International in three sets to Fognini despite being the no4 seed and was booed off the Wimbledon courts following his destruction of the grass with his racquet after tasting defeat.

Czech Republic’s Radek Stepanek will be another difficult opponent, and if compatriot Tomas Berdych – a top 10 player – has a shortlived experience at Queen’s in London then he will listen to whether his coach Ljubicic wants him to warm-up Wimbledon as a Devonshire Park wildcard.

Thomaz Belluci has withdrawn from the tournament, which isn’t the first time that the Brazilian has opted to skip the event.