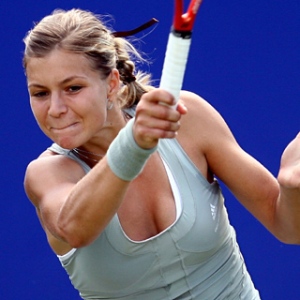 Maria Kirilenko beat Serbian Bojana Jovanovski in their first ever encounter on the WTA circuit to progress to the 2nd Round at Eastbourne today.

The blonde Russian, seeded no10 for Wimbledon, made a mountain out of the opening set but breezed through the second set to register a 7-6 6-1 success.

Kirilenko, who has recently climbed the world rankings to live up to the long-term hype of being one of the rising stars from Russia, combined her natural finesse with a power game but played conservatively before snatching the first set 7-5 on the tiebreak.

With the lead there was no stopping the 26-year-old, who continued her fabulous form to follow on from a set of stunning performances at Roland Garros that propelled her into the world’s top 10 for the first time.

Jovanovski, the world no40, was totally outclassed in a rapid second set with the Russian no6 seed vying to make Eastbourne her second crown this season and took her win-loss record for the year to 28-10.

Capturing this tournament title poses a massive opportunity for Kirilenko to finally live up to the great expectations that have long been weighed on her shoulders.