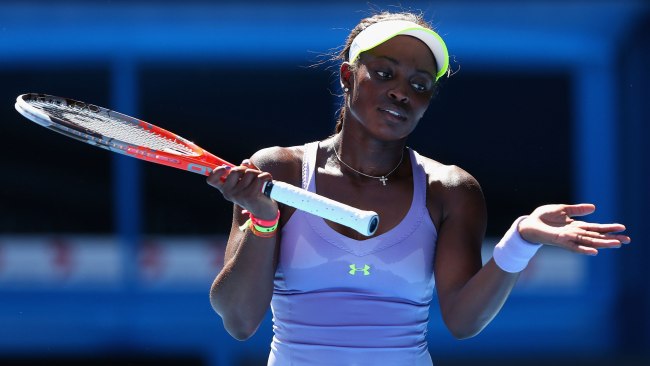 It means, as it stands, that there will be no Americans in the Ladies Singles main draw of the grass court tournament at Devonshire Park for the first time ever – with Russians continuing to dominate in Singles on the professional circuit.

Stephens is suffering from an abdominal problem while Shvedova has an on going right arm injury. Both players have opted to practice and rest ahead of The Championships.

Stephens, who has yet to reach a Singles final on the WTA Tour Singles final, has hit the headlines this year because of her brushes with world no1 Serena Williams.

Williams was stunned by her compatriot at the 2013 Australian Open quarter-final stage, and Stephens apologised – via her Twitter account of @sloanetweets – for her war of words with Williams.

Stephens’ form nosedived after her exploits in Melbourne (and the previous event in Brisbane), but returned to cause problems against opponents during the clay court season beginning at the Madrid  Masters.

She concluded the gruelling season on clay with a run to the 4th Round at the 2013 French Open for the second season on the bounce, bowing out to defending champion Maria Sharapova of Russia.

Doubles expert Shvedova will also miss the traditional Wimbledon warm-up event, which has the usual stellar field in the Ladies Singles.

Although Russian-born Shvedova continues to live and train in Moscow, she switched her Russian nationality in 2008 as part of Kazakhstan boosting its profile on the sporting arena.

Shvedova, twice a quarter-finalist at Roland Garros, came to prominence at Singles during 2012 Wimbledon when she achieved a Golden Set success over Italian Sara Errani. And last year she started to sport prescription sports glasses due to a nervous tic in one eye.