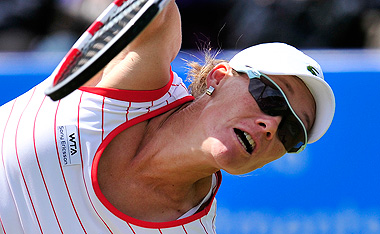 Sam Stosur, who will drop out of the world’s top 10 for the first time since 2011 coming into Eastbourne, has made entering the 2013 AEGON International priority over training.

The Australian has been granted a wildcard entry to Devonshire Park, the traditional warm-up event for Wimbledon, and is relieved to see the gruelling clay court season come to a halt.

The current world no9 exited the 2013 French Open to former world no1 Jelena Jankovic in the 3rd Round and in recent seasons competed in the grass court tournaments at Eastbourne (2011) and ‘s-Hertogenbosch (2012) ahead of Wimbledon.

Stosur, who has not been past the 2nd Round at SW19 since 2009, refused to finalise her schedule until she weighed up all her options and was no longer involved in the French Open Ladies Doubles with the London-based Italian Francesca Schiavone.

But she is desperate to end her string of indifference results and is seeking to gain momentum, having overcome a calf injury that disrupted her build-up to Roland Garros. The Australian ace has also been granted a wildcard entry at the less prestigious but nevertheless testing tournament at Birmingham, the AEGON Classic, which starts next Monday.

The 2011 US Open winner’s career has not taken off as expected since her maiden Grand Slam success.

Stosur said: “I decided last year that I’d maybe try something a little bit different ahead of preparing for Wimbledon.

“I have assessed the time I’ve got to get stuck into the practice and my aim is to try and have a good Wimbledon.

“I am starting to feel better about my tennis after having a very stop-start first five months of the year. I guess the clay court season is over for the moment and then I head onto the grass, and we’ll see what happens there.

“It’s a challenge going onto the grass for me, it’s another opportunity to turn my form around.”