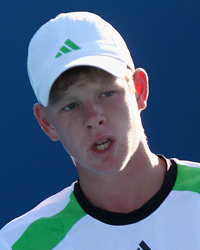 Born in South Africa but raised from the age of three in Beverley, Yorkshire, Edmund has the ability to succeed in both Singles and Doubles and only turned professional last year,

At Junior Singles finished was a quarter-finalist at 2012 Australian Open following on from a final four berth at the 2011 US Open.

In April 2012 became a practice partner for the Great British Davis Cup squad and a month later collected his second Futures title by winning at Vero Beach Florida without dropping a set. Became the youngest British player since Andy Murray to win a Futures event, following his triumph at Birmingham, Alabama, USA in October 2012.

Goes into Eastbourne world ranked no444 in only his second ATP Tour main draw tournament, ahead of competing at 2013 Wimbledon as a wildcard.

One thought on “KYLE EDMUND”