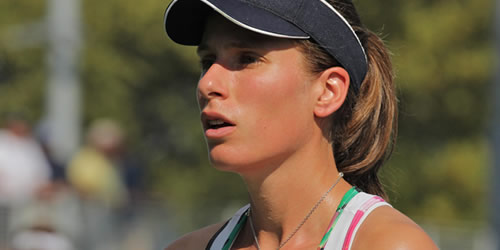 Birthplace:
Eastbourne, England
Residence
Sydney, Australia
Height
5′ 11″ (1.78 m)
Weight
154 lbs. (70 kg)
Plays
Right-handed
Turned Pro
2010
Johanna Konta moved to England from Australia aged 14, settling in Eastbourne.
Turned professional in 2010, played in first WTA qualifying matches without success at Copenhagen and Quebec City. Returned to the ITF Circuit to collect two Singles titles in 2010.
Made her debut in a main draw on the WTA Tour at 2011 Copenhagen after qualifying, only to fall at the first hurdle in the opening Round.
In 2012, Konta failed to get out of qualifying at Eastbourne then came with two points of a shock victory the following week at Wimbledon, only to lose 10-8 in a two-day contest to American Christina McHale.
Granted wildcard entries to three 2013 grass court tournaments – Birmingham, Eastbourne and Wimbledon – seeking to break into the world’s top 100.

One thought on “Johanna Konta”