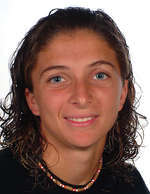 Sara Errani was born in Bologna in 1987 and, thanks to her father, started playing tennis aged five.

She made her first WTA appearance in her native Italy, in the 2003 Palermo tournament, and has claimed two WTA Tour titles – both in 2008, at Palermo and Portoroz.

She has won eight doubles titles with three different partners, although since 2010 she has only played alongside compatriot Roberta Vinci, with whom she has achieved the most success and they have leaped to join world no1.

She shone  in the 2012 Australian Open by reaching the quarter-finals at singles and been in the world’s top 50 since 2009.