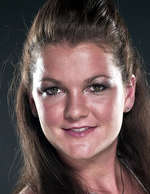 Agnieszka Radwanska is a promising young talent on the WTA Tour and already has seven WTA singles titles – including the Aegon International at Eastbourne’s Devonshire Park.

She made her WTA tournament debut in 2006 in her native Poland, and was among the top 100 ranked players by the end of the season.

In 2007 she claimed her first title – in Stockholm – and became the first Polish champion at that event. She finished the 2008 season ranked in the top 10 after winning three more trophies.

However, Grand Slam success has eluded her, not being able to progress any further than the quarter-final stage –  in the Australian Open (three times) or Wimbledon (twice).

Her greatest achievement to date was reaching the final of the 2011 China Open, where she lost to German Andrea Petkovic.