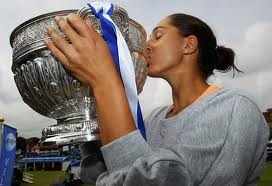 Paszek claimed her first title since she won Quebec City in 2010, her shock triumph arrived on the back of 11 1st Round defeats and just two victories on the WTA Tour all season.

Paszek, a 2011 Wimbledon quarter-finals, made it two shocks in as many days after dismissing in-form French star Marion Bartoli in yesterday’s semi-final and then edging past Kerber in a thriller worthy of a final.

But the world no59 needed three match points to triumph, watched by her father and her Eastbourne-based Godparents.

Paszek took a medical time-out to have her right ankle strapped and called the trainer again to massage her calf during a changeover before clinching the match on her third match point.

I always knew I’m a fighter, I always believe in myself. It’s been one of the best weeks for me by winning a title, everything fitted together.

“It makes it really special to win, first of all, the title on grass, one of my favourite surfaces, and secondly, in front of the family. It was a pleasure to have all my family here and my coach here.

“Grass is good for my game, I love fast surfaces like hard courts and I just enjoy the grass.

”I don’t know what kept me going and how I kept going! I was dead tired in the third set, I could hardly move. I just gave all I had left – and it just was enough.”

Kerber claimed the opening set, which was accompanied by chants from protesting Dutch dockers gathered outside a gate close to Centre Court who accused tournament sponsor AEGON of mishandling their pension fund and handed out black tennis balls to those going into Devonshire Park.

And the world no8 Kerber seemed in control in her bid for a third title in 2012 after capturing the Paris Indoor and Copenhagen events.

But unseeded Paszek bounced back with verve to level matters with some impressive power shots from tight angles.

The Centre Court fans were treated to a nailbiting final set, with Kerber seemingly running out of steam with less impressive groundstrokes as the set continued.

Yet the rising German star, touted as future world no1, created 10 break points but was denied nine of these by brave Paszek.

The unseeded Austrian battled back from a set and 4-0 down against defending champion Marion Bartoli in the semifinals, and she trailed Kerber 4-2 in the final set of their 2-hour, 45-minute final.

Positive play from Paszek ensued, but the talented Kerber had only herself to blame for not producing the sort of clinical finish that she had provided all week.

Kerber fluffed a match point on Paszek’s serve and even though she was gifted a further four match points stuttered under pressure with unforced errors, although all credit must go to brave battler Paszek.

Yet the Austrian suffered injury problems with her right leg after slipping in the seventh game and was forced to take a medical time-out to have her right ankle strapped.

She required the trainer again to massage her calf during a changeover prior to clinching the crown on her third match point.

The 21-year-old sank to her knees and kissed the grass in true Grand Slam fashion, warming up perfectly at Devonshire Park for her 1st Round Wimbledon clash against former Eastbourne winner and ex-world no1 Caroline Wozniacki.