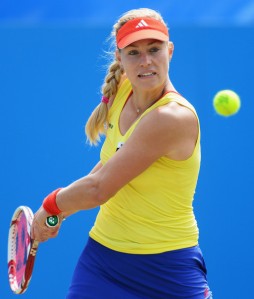 Angelique Kerber, the only player in the semi-final draw to have claimed a WTA Tour title this season, is set to serve up a warning ahead of Wimbledon and the Olympics.

The German ace has been in incredible form at Devonshire Park, scything through the opposition having taken an instant liking to the low bounce on grass.

Winning gives me a lot of confidence. I just try to focus on me, try to make my game plan and to play until the end.

“It’s good to have one more match or maybe two more matches before Wimbledon – this was my goal for playing here.

But Marion Bartoli, the other in-form player throughout the AEGON International, is desperate to defend her title – and become the first at Eastbourne since Belgian Justine Henin achieved the feat in 2007.

Although rising star Kerber aims to claim her third title this term, to boast her confidence ahead of the back-to-back majors of Wimbledon and London 2012 at SW19, Bartoli will be hoping to show the French Tennis Federation (FFT) that they were foolish to ignore her for the Games.

Bartoli, the world no8, has been omitted from automatic selection for the French Olympic Team as she has not played in the Fed Cup over the past four years. And the FFT refused to nominate her for a wildcard.

Bartoli, whose unorthodox game is suited to grass, will be especially eager to win at Eastbourne and carry her impressive form into Wimbledon – where she finished runner-up in 2007 – so that she can turn round to the FFT and say ‘Zut alors!’ or words to that effect.

I’m feeling in good form right now and this year I’m playing quite honestly as well.

“It’s good for me to have this kind of form before Wimbledon, but what I do feel on grass is my steps are very strong.”