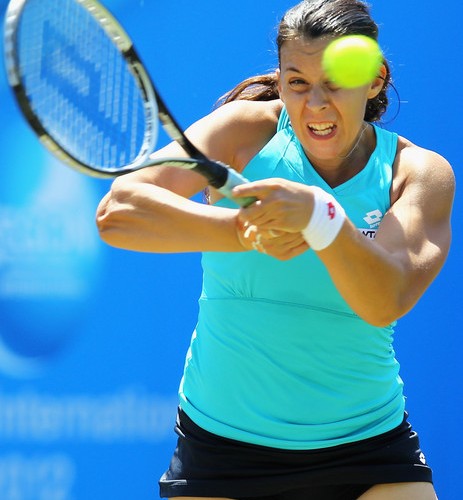 Marion Bartoli brushed aside Canadian Aleksandra Wozniak to storm into the quarter-final stage with a clinical 58-minute win.

The French ace appears on course to defend her title, after teaching Wozniack – who yesterday got the nod for the London 2012 Olympics – a lesson in finishing with a rapid 6-2 6-2 victory.

Bartoli, who was refused an Olympic Tennis wildcard application by the French Tennis Federation (FFT), looked superb on grass – and her emphatic form on her favourite surface is a poke in the eye for the FFT.

I really played well, so I made it easy for me. I was feeling my shot very good from the baseline and I was hitting the ball very hard – that was probably one of the best matches I played on grass overall.

“The thing is I always believed I could win a Grand Slam, but in the Wimbledon final I was 22 years old and I was quite young. I feel like if I’m keeping improving and keeping working out, I will have a chance.