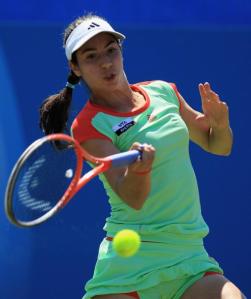 Christian McHale claimed the prized scalp of former world no1 Caroline Wozniacki in three sets to add to the day’s shocks.

The American ace, touted as the next big thing, lived up to the hype by thundering away with the opening set against Wozniacki.

But the Dane, who was unbeaten before today at Devonshire Park after winning the 2009 crown, showed a spirited comeback to force a tiebreak – that she edged 9-7.

With a battling decisive set keeping the vocal Centre Court on the edge of their seats, neither player wanted to lose so played safety shots rather than the swashbuckling tennis of the previous sets.

Yet it was the tenacious talent of McHale, whose gritty determination and hunger for success, made her a worthy winner 6-1 6-7 6-4.

“I am really excited to have pulled that one out – I thought I played well today so I’m really, really happy.” 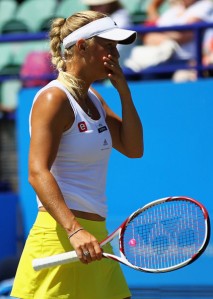 Wozniacki, the world no7 who had been practising at Eastbourne since last Thursday, was witnessed losing in front of golfing professional boyfriend Rory McIlroy.

But she isn’t going to rush away from the seaside town and explained:

“Obviously I would have liked to have won that match, but at least I got some points in.

“I started off not really well, especially on my serves – I didn’t get any advantage out of those and felt the pressure straightaway.

“She was serving and returning well.
In the second set I felt like I found my game and started to play much better. But the third set could have gone either way.

“She played a good match, and I had some chances and I didn’t take them -on grass you get punished for that.

“Obviously I want to be in the tournament, but there’s still a lot of girls out there I can practice with and you can play sets with them – that’s just what I’m going to do.

“I’m now just trying to work on a few things before Wimbledon. It’s not really going to be a setback. I didn’t play any matches last year on grass before I went to Wimbledon – and this year I can win there.”