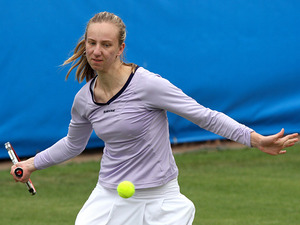 Mona Barthel will arrive at Eastbourne’s Devonshire Park keen to made amends for her poor performance on grass at Birmingham.

The German star, seeded no6 at the AEGON Classic at the Edgbaston Priory Club, was ousted by Czech Republic stunner Andrea Hlavackova in straight sets.

The 25-year-old, a Doubles specialist who won the 2011 French Open with compatriot Lucie Hradecka without conceding a set, saw off Barthel 7-6 6-2.

Fellow Russian Ekaterina Makarova, seeded no8, was given the runaround in her 7-6 6-3 tussle to beat Kazakhstan’s Sesil Karatantcheva.

Ex-Eastbourne champion Makarova next faces New Zealand no1 Marina Erakovic – the no9 seed – who delivered the knockout blow to Britain’s Laura Robson 6-4 3-6 6-4.

And fellow Brit Melanie South put on a brave battling display before succumbing to former world no1 Jelena Jankovic of Serbia, seeded no5, 6-1 7-6.